My Biggest Surprise about the Salesforce-Slack Deal

The rumors were true: Salesforce is buying Slack, the popular messaging app beloved by many software development teams and startups, for $27.7 billion. This is Salesforce’s largest acquisition to date.

Prior to starting Tact.ai, I led the product team that brought Chatter – Salesforce’s messaging and collaboration app – to market back in 2009. On some level, this deal was no surprise to me. Marc has always been passionate about the collaboration market, and he has shown he is willing to buy his way to success if he can’t create it internally. And what better company to buy than the darling of the modern collaboration market?

Salesforce’s stock price is fueled by revenue growth, and as their organic growth slowed, they have turned into an acquisition machine to buy their way into revenue growth. What better market to buy into than employee collaboration, as companies rush to invest in future-of-work technologies amidst a pandemic? As tempting as Zoom’s quadrupling revenue is, it’s too big to buy.

So it’s not surprising Salesforce went after Slack – especially given their less-than-impressive performance on revenue. Slack is experiencing only modest growth, despite the current boom time for collaboration and remote work given pandemic work-from-home restrictions. Investors had to wonder: if Slack couldn’t gain ground in the midst of this monumental shift, when would it?

The timing also isn’t a surprise given how “cheap” Slack is, especially if you consider that Salesforce is paying for a big chunk of the purchase with its stock which recently hit its all-time high after the COVID slump in March.

But we all know it’s not just about the economics of the deal. Salesforce’s ultimate nemesis is Microsoft and what better way to poke them in the eye than to buy the competitor to their fastest growing product, Microsoft Teams. This isn’t the first time Salesforce has made a move into Microsoft’s territory. Back in 2016, they bought Quip as a shot across the bow to Redmond, to challenge its document collaboration business (Microsoft Word, Excel, PowerPoint). Could the combination of Salesforce, Quip and Slack be a credible threat to Microsoft?

While there are plentiful product synergy possibilities between Salesforce and Slack, I am less optimistic about the revenue synergies I’m sure investors are hoping to see out of this deal in the long term.

Back in the 2009 to 2011 timeframe, Salesforce invested heavily in making Chatter as a “social business” application with tight CRM integration. However, building it into a product that could inspire broad corporate adoption challenged us – the Super Bowl ads didn’t help either 😜. Some of the issues were technical – Salesforce is a database-centric company, founded by Oracle alums on a relational database foundation. Database software and unstructured communication software like Chatter or Slack represent completely different branches of computer science.

While the architectural issues were significant, I think the underlying issue was that Chatter is not the sort of product Salesforce was set up to sell effectively. The per-user fee they can charge for a collaboration app is nowhere near what they can charge for CRM. While Salesforce has one of the industry’s best sales teams, the sales motion needed to sell a company-wide communication solution to a CIO is very different from one that’s all about selling business value based solutions to a departmental leader like the VP of Sales, Customer Support or Marketing. So, while its tempting to think Slack’s bottom-up, product-led growth can be easily complemented with the top-down enterprise sales motion, reality is more complicated than that.

Slack built its reputation on an excellent user experience, becoming a phenomenon that its users – starting with developers, designers, marketers, venture capitalists, and journalists – fell in love with. Adoption snowballed in that organic growth phase. Then came the pandemic, and suddenly a lot of companies that had never invested in modernizing remote work infrastructure felt the need to ramp up quickly. As CIOs tightened operations, they were left to choose between the app that employees adopted on their own in smaller pockets or the messaging product that comes bundled with their existing, familiar, InfoSecurity-approved Microsoft Office suite. Teams was the safe and easy choice, not Slack. And suddenly Teams was everywhere.

Microsoft has an army of sellers who know exactly how to sell Teams. It may not be as slick as Slack, but no one would contest that Teams is pretty darn good enough. Also, you get Teams for free with Microsoft Office. Plus, email, calendar and a unified communication platform including voice and video – all of which Slack and Salesforce lack. Most importantly, Microsoft owns the employee’s digital identity within an enterprise (and incidentally, their professional identity on LinkedIn). Owning the identity and the ecosystem of communication tools is key to winning the battle for the future of work.

What Did You Expect

That leads me to my biggest surprise. Why didn’t Google muscle its way into this deal to buy Slack? There’s really only one other player that can hold a candle to Microsoft on the identity and unified collaboration front, and that would be Google.

If you consider what Google already has in Gmail and Workspace, it might make sense to you, too. Google ought to be able to craft a Slack competitor that would be better than Teams, but so far it just hasn’t. From Google+ to Allo to Hangouts, Google has repeatedly confused the market with aborted attempts to create a coherent messaging experience. Yes, there is Google Chat, but let’s face it: it’s no Slack.

What makes this even more puzzling is that Salesforce didn’t need Slack as badly as Google does. Salesforce will tighten its integration with Slack, but it was already doing so via APIs that are also available to Teams and other messaging platforms. Salesforce could have achieved the product synergies by simply partnering deeply with Slack. Sometimes the best experiences on Salesforce come from their partners, which is why AppExchange has grown to what it is today.

Slack, for its part, would have had a much better chance to truly fulfill their mission to “make work life simpler, more pleasant and more productive” as a part of Google and its Workspace ecosystem than as a part of Salesforce and CRM. In some ways, even Zoom would have been a better home for Slack.

I have no doubt that Jeff Chang and his excellent team at Qatalyst Partners, who were the lead advisors to Slack on this transaction, shopped the deal with Google, Zoom and possibly others. But I’m guessing no one was willing to step up to the premium Salesforce was willing to pay.

The folks at Microsoft must be breathing a sigh of relief.

The Future of Work

I think the ultimate two-horse race in messaging apps for internal collaboration will come down to Microsoft and whatever Google puts forward as its messaging play to complement Google Meet. The current incarnation of Google Chat leaves much to be desired, but I wouldn’t count out Thomas Kurian and Javier Soltero quite yet. They have an intimate knowledge of the enterprise and simply can’t afford to let Microsoft Teams go unchallenged.

Taking a broader view, the trend I really see at play here is the rise of asynchronous communication versus synchronous communication. Developers have always hated meetings (some of our development teams at Tact.ai even instituted a “no-meeting Tuesdays” policy) which is one of the reasons chat tools like Slack are so popular at tech companies. The rest of the world was largely still communicating face-to-face in conference rooms, until COVID hit. Working from home, we all had to suddenly move our daily meeting rituals to Zoom or Teams Meetings.

But, let’s face it. We’re all suffering from Zoom fatigue, Eric Yuan included. My four children are doing remote learning since our school campuses have been shut down since March. No matter how good their teachers are, there’s only so many hours in a day the kids can stare at the Google Meet gallery view of their classroom. So, like our no-meeting Tuesdays, our school district instituted “asynchronous learning Wednesdays”.

Thankfully, the vaccines will be here soon enough. Yet I don’t believe we’ll go back to our old ways, now that we have tasted the true power of remote work and asynchronous communication. With billions of people already trained on texting, WhatsApp, and WeChat, asynchronous messaging will permeate the workplace.

A similar transformation is starting to happen in how companies work with their customers. Our focus at Tact.ai has always been to create a human-friendly customer engagement platform that unifies and enriches how field teams work with customers: which has traditionally been phone calls, emails and in-person meetings. With the pandemic, our customers like Honeywell or Novartis have seen their field teams go from road warriors to digital warriors.

Like every other company in the world, they first deployed a video conferencing tool to host sales meetings. But, as I said earlier, Zoom fatigue is real, and customers are no exception. As customers struggle with their own work-life multi-tasking and time management, it’s becoming increasingly difficult for sales teams to engage customers synchronously through a push model.

We launched Tact Portal, to give *our* customers a way to digitally engage *their* customers through an asynchronous messaging platform that’s completely embedded into existing customer portals or apps. A one stop shop, if you will, for customers to reach-in at their convenience and collaborate with your team through chat, file sharing and commenting, video and voice. We’ve developed industry-specific variations, for example to empower healthcare professionals to interact with pharma reps or medical liaisons on demand, through the pharma company’s medical portal.

This new asynchronous, pull-model of customer engagement is here to stay and Facebook’s acquisition of Kustomer, a specialist in customer service via messaging apps for B2C brands, is clear evidence of that. Now, this doesn’t mean the end of the face-to-face meetings – not by a long shot. B2B relationships are complex, long-lived and multi-threaded. That’s why our team at Tact.ai works so hard to create an omnichannel platform that marries the traditional models like emails, calls and meetings with the new digital model of asynchronous messaging. 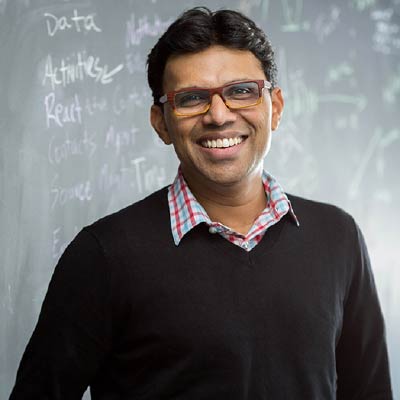 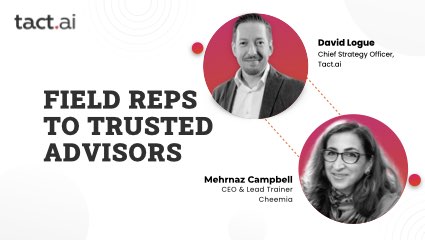 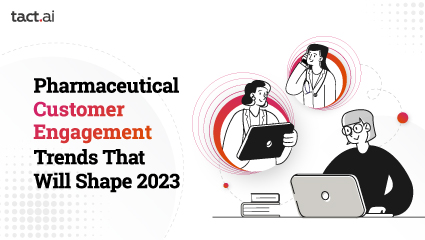 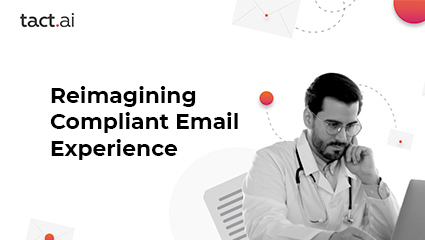 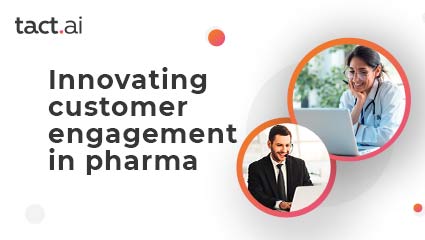 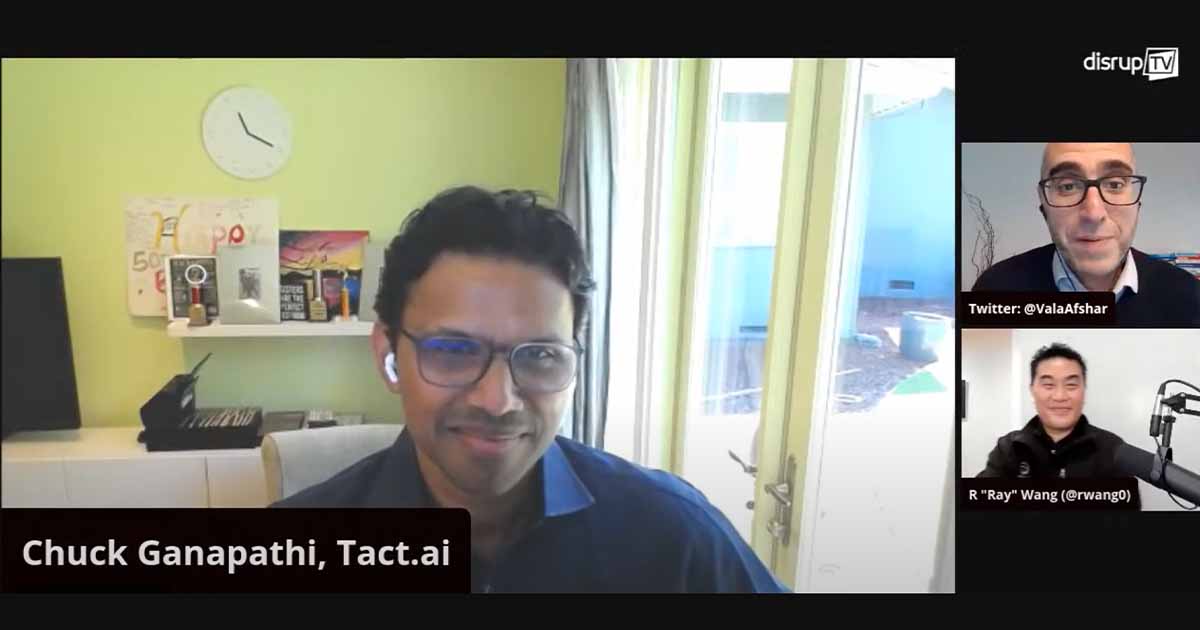 As we navigate through the pandemic; return to work and what that means moving forward becomes an important question to ask. As few companies start gearing up towards remote... 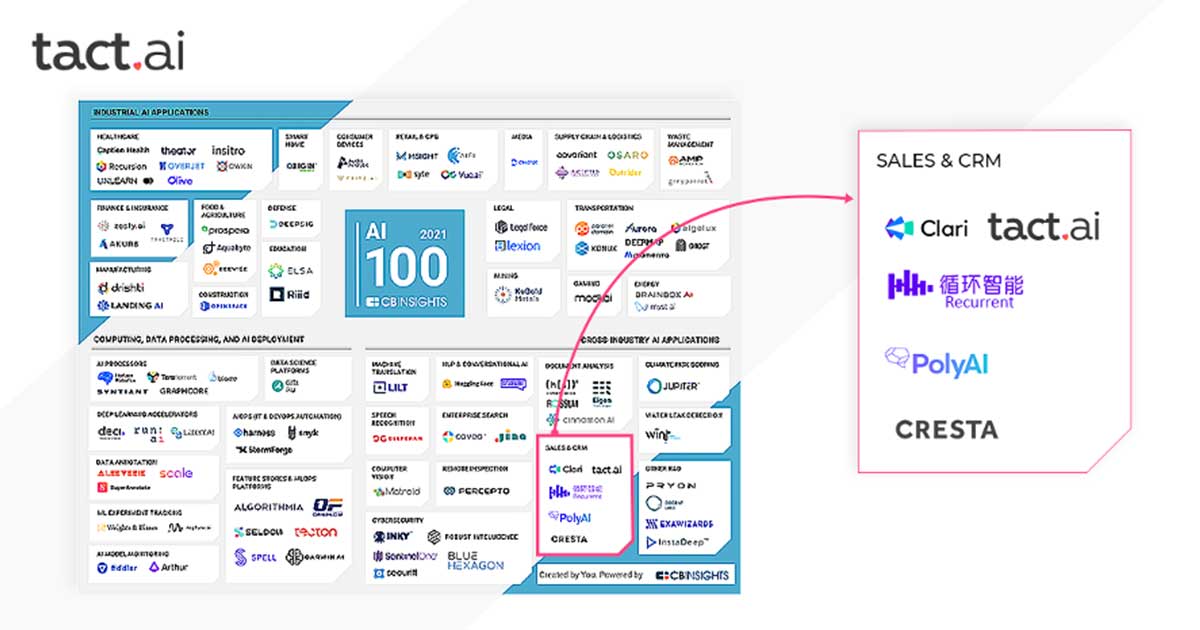 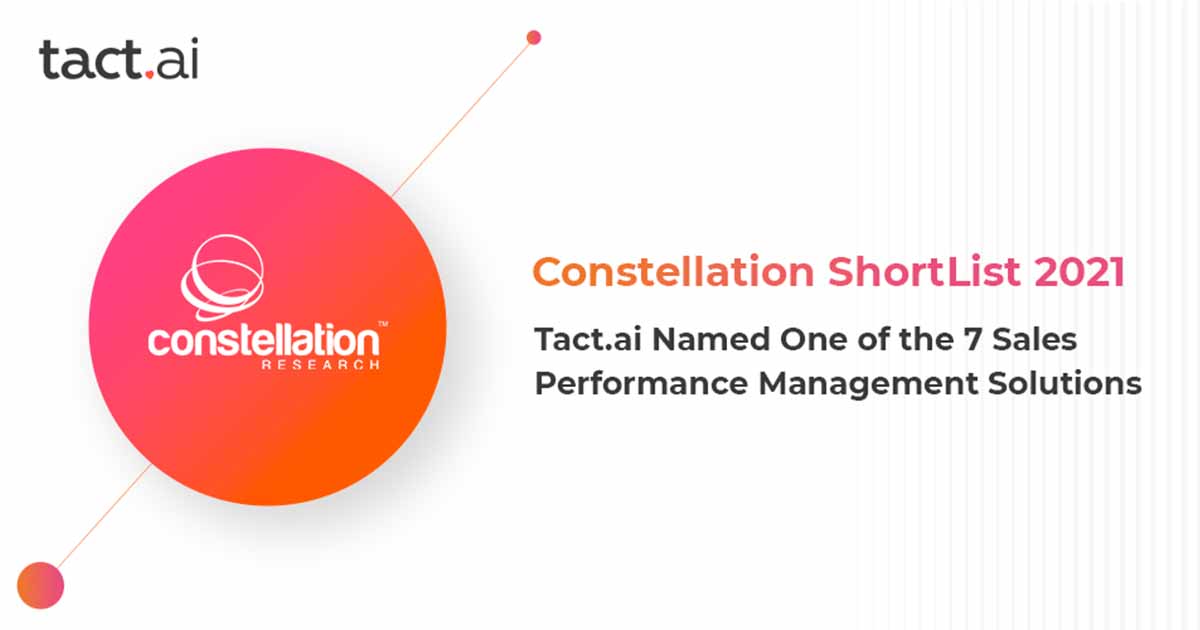 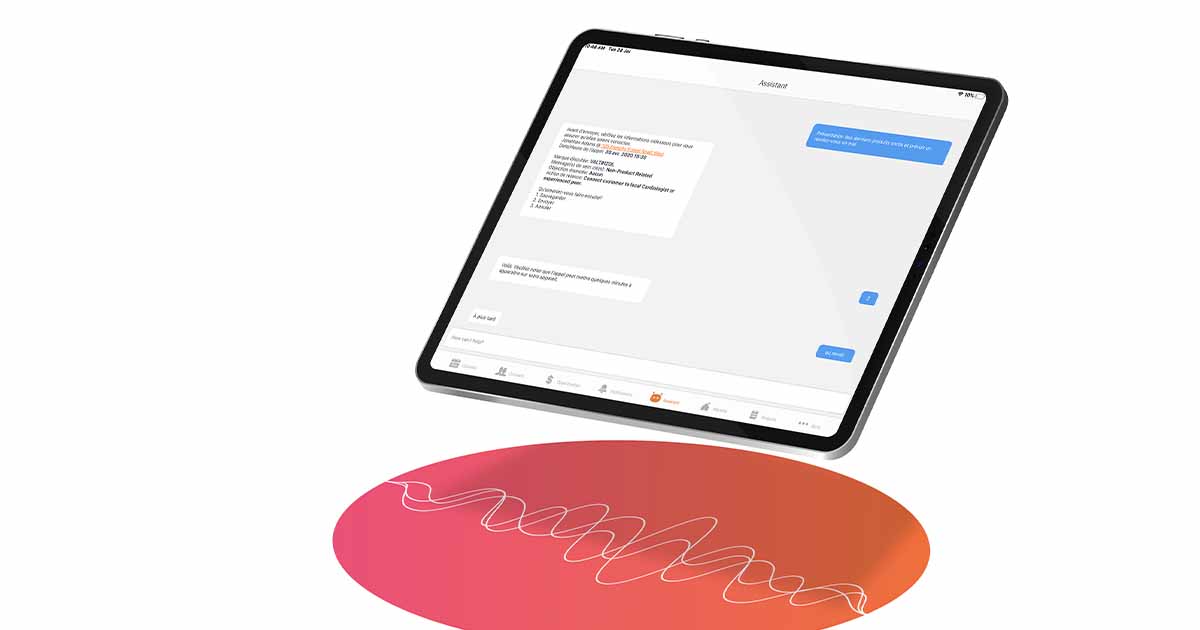 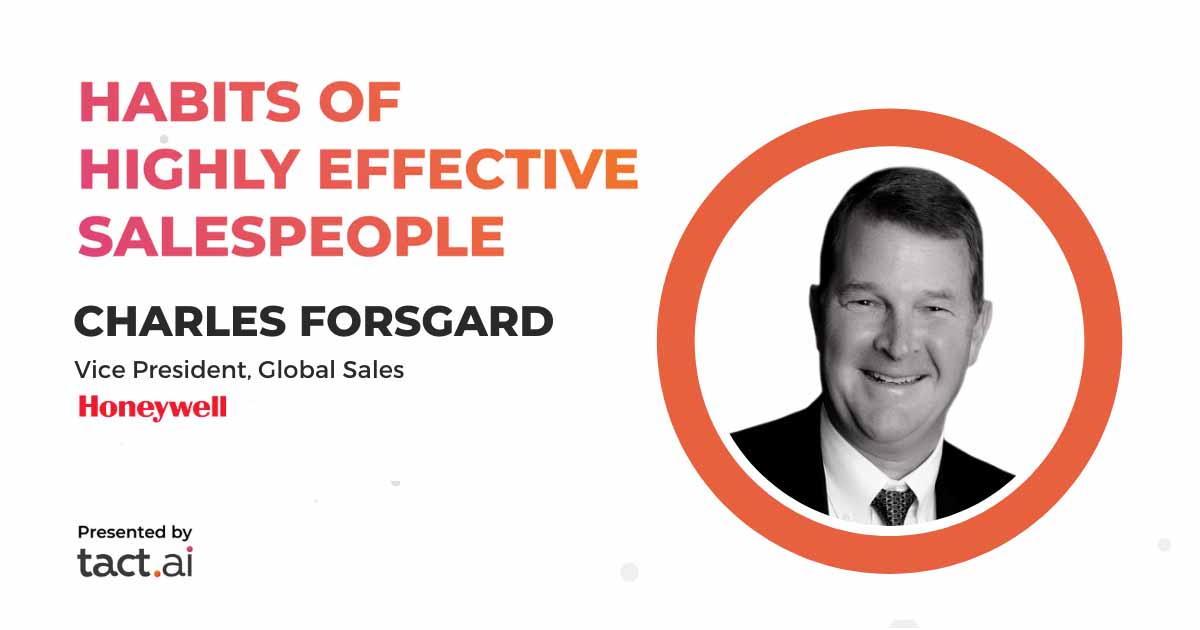 Honeywell VP of Global Sales Charles Forsgard on why traditional CRM and the old world of sales won't cut it in today in Habits of Highly Effective Salespeople... 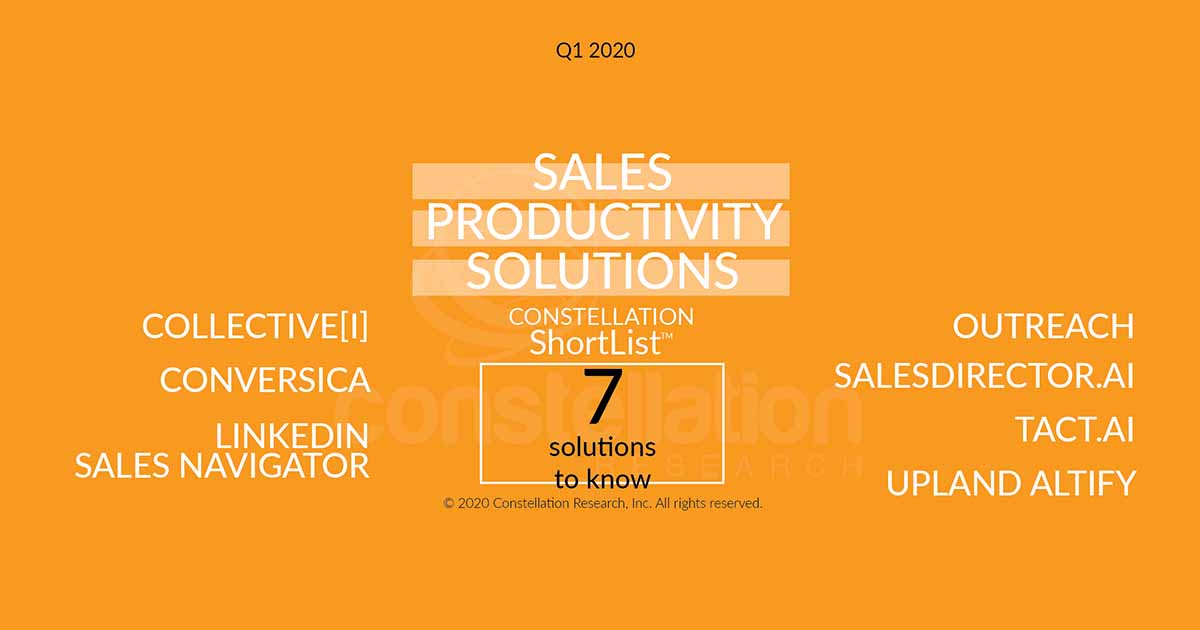 Tact.ai has been chosen for Constellation Research ShortList for Sales Productivity Solutions 3 years in a row.The Constellation ShortList portfolio identifies the top vendors...